Moonlighter is an indie roguelike created by Digital Sun, released earlier this week. The conceit of the game is that your character, Will, runs a shop in a town reminiscent of the Harvest Moon franchise, and during the night you moonlight as an adventurer in order to collect the wares to sell during the day.

The game features upgrade systems, dungeon crawling, a core shop-owner mechanic, all wrapped in a package that takes enormous influence from the SNES and handheld Zelda games.

I was really excited about this game from the trailers. It billed itself as a story-based RPG ‘roguelite’. And, certainly, it does a lot of things right. However, after putting 12+ hours into the game and completing it, my feeling walking away is that it didn’t live up to my expectations.

First, the shop system, which feels so fresh and interesting at the start, devolves into a pointless chore by the end of the game. It’s just a very drawn out way to do what is an incredibly standard-fare RPG chore — dump out your inventory. The mechanics are quite shallow. You set your item prices and then, based on customers’ reactions, refine them (it’s a hi-low guessing game that takes two seconds). Once you’ve discovered the price of the item, that’s all there is to it. You go out and refill your inventory, return, set the items up, and wait while customers browse around and slowly bring them to the counter, occasionally dealing with an unwanted thief that you have to click to get rid of. It lacks any of the depth from similar storefront games like diner dash, etc. While later on, special item requests appear, they’re tedious WoW style fetch quests (i.e. Kill 10 x), for a reward that is inconsequentially small. 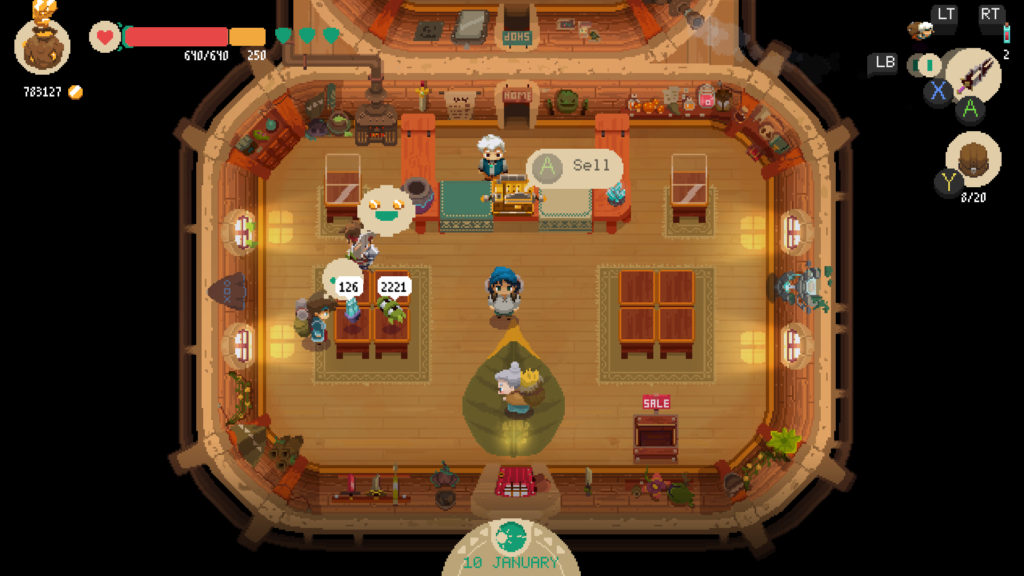 The game is enormously and unforgivably grindy. In fact, that’s basically all there is to the game — progression. The gameplay remains pretty much the same throughout the game, only the difficulty increases, and the artistic variety of the dungeons. The entire game is based on the mental construction “what am I trying to unlock right now?” and then grinding through dungeons to get enough money to make that happen.

The grinding itself is partly enjoyable, because the combat is fluid and the dungeons themselves are visually interesting. However, you’re deeply limited by a small inventory that never increases in size. I’d say about 30% of the time I spent with this game was throwing unwanted items out of my inventory. They add a ‘puzzle’ aspect to inventory management, wherein some items are cursed and have to be placed in certain spots within the inventory system. To me, what this amounts to is that they took the most unfun, dull chore from games like Diablo, made it even more of a chore, and then doubled down and made it a central plank of the overall game loop. 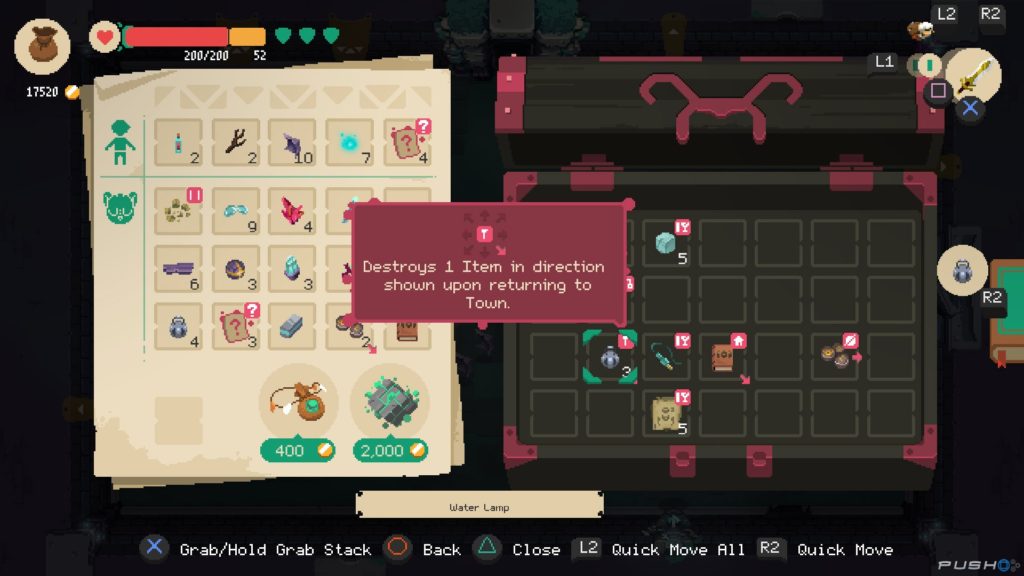 The actual upgrades that you’re grinding for are deeply flawed as well. You have a variety of weapons, each of which can evolve in one of two directions — pure damage, or lower damage with a status effect on hit. You have a selection of armors — stronger and slower, or faster and weaker. And then you have the town upgrades. Of these, the town upgrades are the most successful. The weapon and armor choices feel illusory. You absolutely have to upgrade to the next weapon and armor tier, but the choices are inconsequential. I tried both the fast armors (raises movespeed) and the slow armors (lowers movespeed) and noticed absolutely no different except that the ‘fast’ armor granted half as much health.

The weapon upgrades are similarly uninteresting. The difference between the weapon types are minor, so there’s no real reason to not just pick the melee weapon that fits your style and then have the bow for a secondary ranged option. Each weapon has a unique secondary skill that takes a while to charge for an unimpressive special attack — in practicality, using these special attacks is not worthwhile in combat, so the weapons amount to slightly different attack animations. The choice between status effect weapons and damage weapons is also unrewarding, for two reasons. First, after the first weapon upgrade, the added status effect is just a DOT. It works out to about the same damage overall, so your choice is mathematically pointless. Second, the added status effects are uncreative and boring. They’re just DOTs. 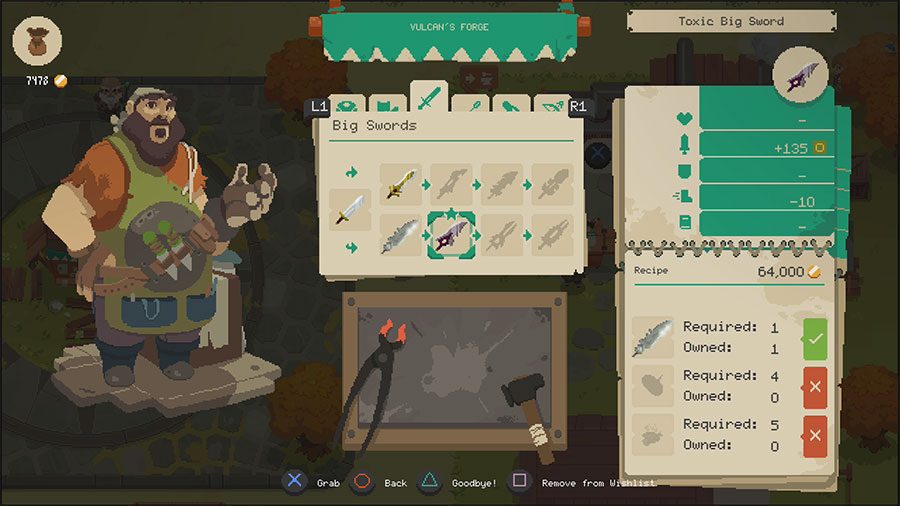 What really irritated me about the status effect weapons is that the first upgrade gives your weapon an amazing added effect — chance to stun, even on bosses. It made me think that going down this line would give me a cataclysmic weapon that eventually had all sorts of added effects — chance to stun, poison, burn, steal life, etc. However, that’s not how it works. Your status effect is replaced by the next tier’s status effect. The order goes: stun -> poison (DOT) -> burn (DOT) -> electrocute (DOT). So not only does the status effect instantly downgrade after the first upgrade, it then never changes again. The sword line also implies, by naming the terminal upgrade “vampire short sword”, that the last upgrade has lifesteal. It does not.

It would have been better if the upgrades were more along the lines of: poison (DOT) -> burn (upgrades DOT) -> electrocute (keeps DOT, adds chance to stun) -> lifesteal (keeps all previous statuses and adds lifesteal). Or, they could have expanded on the enchantment mechanic, which as it currently stands is just a money sink to upgrade the weapon damage, to allow for customization of the weapons with on-hit effects and tossed the whole weapon selection system out the window entirely.

The story is largely non-existent. It has roughly the same amount of story as Harvest Moon. Someone talks to you at the start of the game, and then some things happen at the end of the game. That’s it. The in between is 99.9% grinding for money. 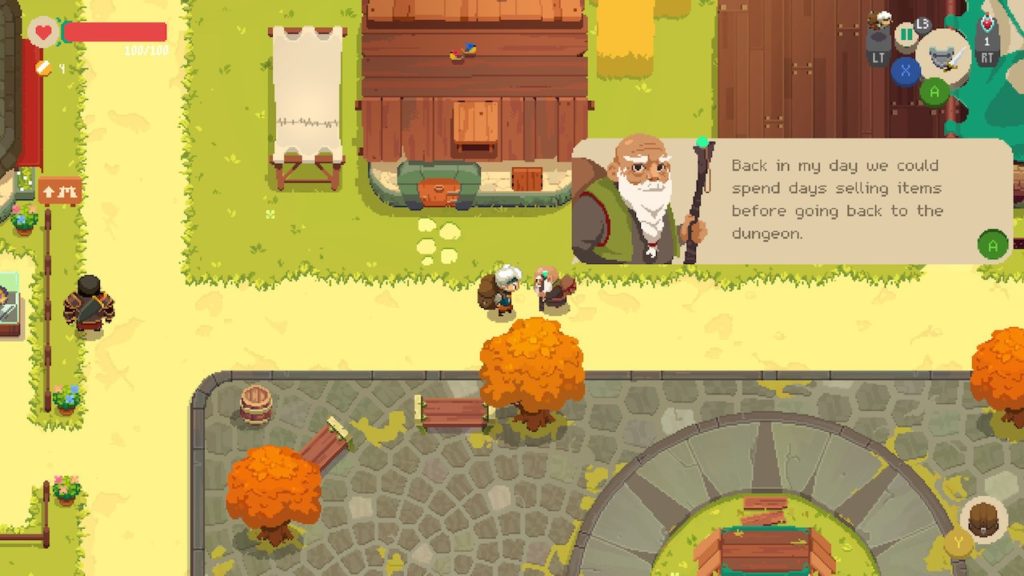 It’s not all bad, especially in the art department. The art style is well-realized, and the environments look incredible. The animations stand out as being particularly noteworthy. The moment to moment gameplay as a dungeon crawler is also quite fun, but it’s very simple. Imagine Zelda, or, more closely Terranigma/Illusion of Gaia (if you’ve heard of those), but without any of the creative and interesting tools that spice up the gameplay of those games. The enemies are varied and quite interesting, making moving to the next dungeon satisfying, and the boss monsters are all pretty memorable (though the great boss fights just make it sting more when you realize you can never go back and re-challenge them). Among the various upgrade systems, upgrading the town and house felt pretty satisfying. 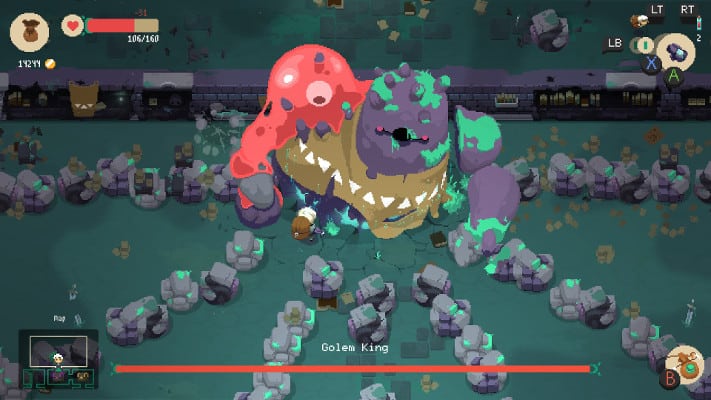 Since you end up having to go through dungeons so many times for the grind, I would have loved to have seen aome kind of ranking or reward for getting to the boss room faster, with less hits taken, more loot value collected, etc., so at least there could be that aspect of trying to beat your own record. This, also, because there is zero replayability to the game. Once you’ve finished and exhausted the series of hoops you’re expected to go through in terms of upgrades, there is no ‘there’ there anymore.

Ultimately, I was taken in by the promise of something fresh, and realized that I had been hoodwinked into playing the exact type of indie game I’m super tired of and wish the scene would move on from already: a procedural roguelike with a lot of tedious game-padding that relies far too much on the nostalgia of the games that inspired it. If they cut out a majority of the grinding and took the game from a 12 hour slog to a 5 hour challenge and added some mechanics that create replayability, it’d be improved dramatically.

As it stands now, I would only recommend Moonlighter if it was discounted substantially. It mashes up and waters down aspects of Zelda, Secret of Mana and Harvest Moon. I would recommend playing those games instead. 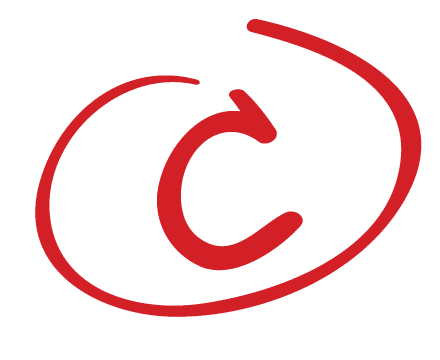 If you find you keep coming back, sign up for an account! With an account you can customize your profile and write blog posts that are seen by all other users, as well as possibly being showcased on the main site. Registered users can also comment on posts and view each other's profiles. If enough people sign up, I'll add more social features to the site.

Growing up in the 1990s, Playstation 1 was where it was at. It was a perfect blend of creative and pushing technology. In today’s environment, there’s a lot more segmentation. Huge studios push the boundaries […]